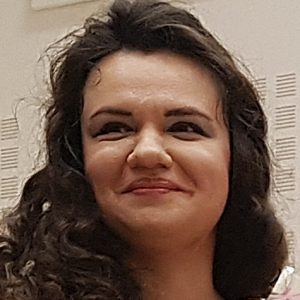 Young Russian violinist Anastasia Vedyakova is the latest recipient of the Elgar Medal. The award is highest honour to be granted by the Society and is presented to those who have demonstrated continued commitment to the promotion of the life and works of Edward Elgar or the aims and objectives of The Elgar Society. Over the last decade, Anastasia has worked tirelessly to promote the music of Edward Elgar in Russia and has performed almost all of his music for violin including of course the Sonata and the Concerto with orchestra, as well as overseeing performances of the Elegy and Sospiri. She has also made an arrangement of the Imperial March for a vast wind ensemble. Her concert venues invariably have portraits of Elgar, the Birthplace and other relevant images prominently displayed, and she frequently talks to audiences about Elgar and his music. The presentation was made at the end of a recital given at the Royal Northern College of Music by Vice-Chairman Stuart Freed, who spoke of her outstanding work in her home country and continued commitment to Elgar’s music.