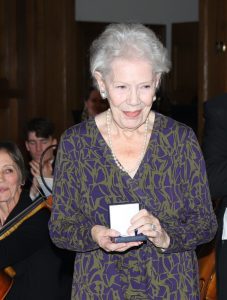 At a concert given to celebrate the 50th anniversary of the London Branch, Dame Janet Baker was presented with the Society’s highest honour, the Elgar Medal. After a short introduction by Vice-President Andrew Neill, Chairman Stuart Freed made the presentation saying that the award recognises and acknowledges the huge contribution that Dame Janet has made to the understanding and appreciation of Elgar’s music around the world, through her  continued support of the Society as a Vice-President and her work as President of the Elgar Foundation. However, it is her peerless performances and recordings of the Dream of Gerontius, Sea Pictures and The Music Makers, that made her one of the supreme interpreters of  Elgar’s music. Having accepted the award, Dame Janet spoke briefly, saying how pleasing it was to be able to join music, performers and audience together to pay tribute to Elgar after such a long time of isolation and restrictions.